BCI’s or brain computer interface have been around for awhile. You may be familiar with the application of BCI technology in the medical ffield wher it has been used to help paralyzed patients with prosthetic devices such as limbs. Controlling a drone with a BCI is something new.
The University of Florida held the worlds first mind controlled drone race on April 16, 2016. Mark that date. It could be the start of something big.
Professor Juan Gilbert, whose computer science students organized the race, is inviting other universities to assemble brain drone racing teams for 2017.
Imagine combining FPV drone racing with VR virtual reality and controlling it all with your mind. Kowabunga!
The race had 16 competitors who used only their brain power to guide their drones over a race course of 10 yards of a indoor basketball court.
The drone racing pilots wear electroencephalogram (EEG) headsets, which are tuned to determine the electrical activity linked with specific thoughts in the brain. As an example identify the brain cells that fire when the EEG headset wearer imagines an action such as pushing an object across a floor.
Programmers than write the code that will turn these signals/thoughts into commands that will be sent to the drone. Resulting in the corresponding action being implemented through the drone.
It is kind of like binding new keyboard commands to hot keys when playing a video game for the first time, just using brain waves instead of keyboard keys.
There is more information on BCI drone technology and drone racing brain controlled at braindronerace.com
The person credited with the first public example of a mind controlled drone was University of Minnesota’s Dr. Bin He, in 2013.
Ok, so the drones aren’t exactly ripping down the race course. But hey they are being controlled by the drone pilot’s brain!
All these technologies are advancing rapidly and one can only imagine what the future holds in the new and exciting world of drone racing. 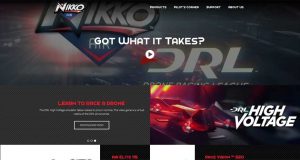 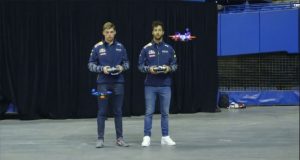